The Society has started posting displays in the window of Bob McKievers building.  Swing by and check them out.  Here is part of one:

Bennington use to be a self sufficient town.  There were a large number of downtown businesses and folks had a little reason to run into Omaha or Benson for anything.  Actually, travel during the war was discouraged because of the war effort and gas rationing.
Darrell Logeman came across an old box of Clover Leaf Grocery Store receipts and gave them to us.  That store was operated by Roy Gordon and his daughter Jeanette.  The box was like a time capsule, showing businesses, services and costs of things 7 decades ago.  A lot of things have changed:   For instance you only had to dial 4 numbers to make a phone call.  Today, we have to dial 10, but then again, everyone has a cell phone.  A dollar went a long ways in those days compared to today.  A candy bar or soda cost a nickel rather than a dollar and a gallon of rationed gas cost $0.20.   Here are some of those receipts and examples:
Special Tax Stamp –“Retail Dealer in Uncolored Oleomargarine”  In the old days people used real creamery butter.  Just prior to the war oleomargarine was introduced as a substitute for butter.  It was something “new” and even the IRS got a piece of the action by taxing its specific sale.  It resembled lard when sold but came with a yellow coloring agent that when blended made it look more butter.  White oleomargarine was sold well into the 1960’s due to the efforts of the dairy industry in some states.  They probably thought the inconvenience of having the buyer color the margarine helped butter sales.
The Idea Gas Station.  That gas station was owned by Chet Witte and was located (15417 S. 2nd Street) on the south east corner of Warehouse, Stark and Main Street.  We complain about gas prices now but in those days the issue was simply getting gas ration stamps that allowed you to purchase it.  Receipts suggest 5 gallons of gasoline was purchased each week at the cost of $1.00. 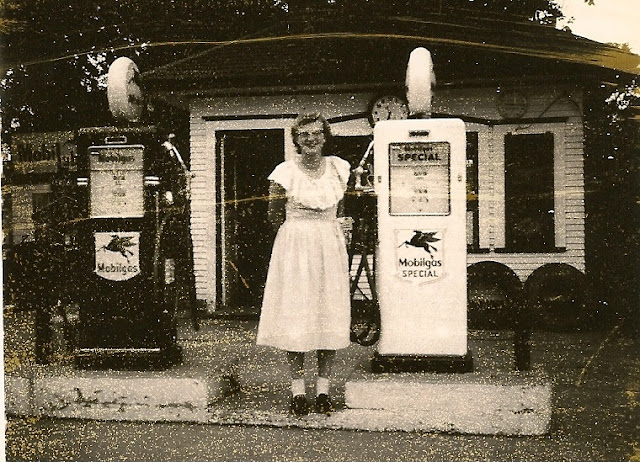 In those days, station owners also made deliver of fuel oil and gasoline to residences and farms.  The old fuel oil tanks typically held 300 gallons.  One receipt showed a delivery of 260 gallons cost a little over $21.  That is 8 cents a gallon!
C.W.Hadan had a plumbing, heating and electrical business at 15313 S. 2nd Street called “Modern Utilities.”  It’s probably safe to speculate that Bill helped every home owner and business in this City.  His business was eventually bought by John M. Grant who operated the store with his wife “Snooky” into the 1970’s.  John charged $3.00 for a business call during the war.
The street up by Cubby’s is named in honor of Bill’s contribution to this community.  His original building still stands but has been converted into an apartment building.
Chicago and North Western Railways Co.  The majority of shipping and much personal travel was done by train.  The depot was a busy place.  What you couldn’t find in town could be ordered and shipped in by train.  One receipt showed that nearly 500 pounds of fence wire was bought and delivered to the Bennington Depot.  The delivery cost was 70 cents per hundred weight.
Neumeyer Farm Equipment Co.  Hans Neumeyer’s had a Case implement and parts dealership located in what was previously the old Petersen Garage.   It was found at 15415 S. 2nd Street and no longer survives.  A new building was built by Miles and Nelson that house apartments now.  You can see the Case Implement sign over the gentleman’s shoulder.
Clearvue Dairy.  A lot of farmers supplemented their income by milking.  Nearly everyone had a few milk cows that produced milk for the family and surplus milk, cream and butter was sold in town.  Several herds expanded into full fledge dairy operations.  Having a milk herd was a lot of work; demanding the cows be milked both in the morning and evening 7 days a week.  We believe this dairy was located a little more than a mile west of Bennington and it was owned and operated by Otto Leppert.  Otto sold (wholesale) his milk for $0.64 a gallon.
Farmers Union CO-OP. Merc. CO.  The Farmers CO-OP was located on the east side of the bank building (15322 S. 2nd Street).  They sold agricultural supplies and equipment. They also had a lot on Warehouse Street where they received and stored coal, kerosene, gasoline and other bulk materials from the railroad.    A great number of homes and businesses at that time were heated with coal and fuel oil.  We learned that a ton (2,000 lbs) of delivered coal cost $12.75.
Clover Farm Store   The Clover Farm (Bennington) Food-Center was a nationally operated franchise.  Bennington’s was located on the southwest corner of Stark and Main Street.  It was operated by Roy Gordon.  After the war the franchise was changed to IGA (Independent Grociers Association).  Farmers would commonly trade produce for groceries or sell produce for cash.  In September, Fred Werner sold 379 lbs of melons to the store for $13.26.  That’s three and half cents a pound.
Nebraska Power Company was the predecessor to Omaha Public Power District.   Clover Farm Store had a large freezer plant.  This was at a time when individual freezers were both expensive and rare.  Most residence rented a box at the store to keep their frozen foods.  Power demand was high.  In June, the bill was $4.91!
Bennington Transfer.  Hans Neumeyer owned a trucking company in town that was located at 15520 Warehouse Street; across from the Library.  The original building still stands.  The transfer company hauled milk and would make scheduled trips to Omaha picking up goods for local businesses.  This receipt suggests they picked up meat and paper goods for the store.
Have old pictures or artifacts you’re willing to share?  Give the Historical Society a call:  402-614-7509 or come to our meetings.
Thanks
Photographs, courtesy of Marvin Tiedje and others.
Posted by Bennington Historical Society at 5:28 PM