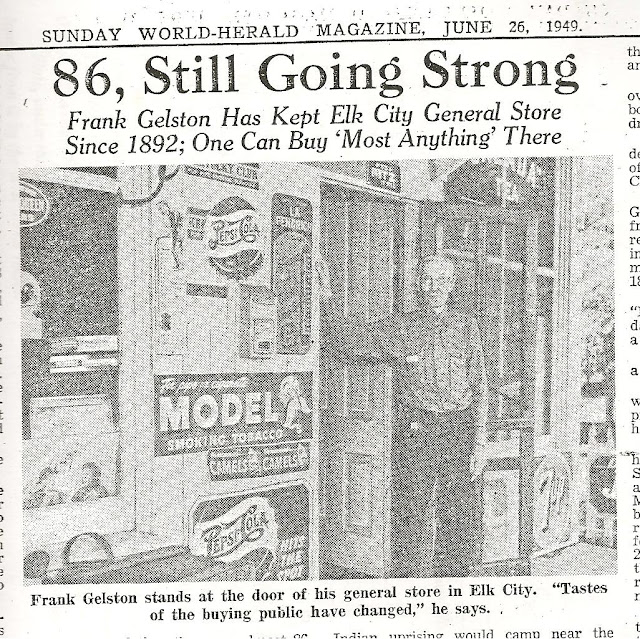 My cousin brought me a copy of an old newspaper article (Omaha, World-Herald Magazine, June 26, 1949) about Frank Gelston who ran the General Store in Elk City.  It is a fascinating story, I hope you find it as interesting as I did.  Here are some excerpts written nearly 65 years ago:

“Elk City’s General Store isn’t a modern serve-yourself super-market.  But then, few customers rush in and demand immediate service.  Most pause a while to chat with or seek the counsel of congeal 86 year old Frank Gelston, owner and operator since 1892.  In spite of his years, Mr. Gelston, with the help of Mrs. Gelston, still keeps the store open six days a week.  “We don’t open on Sunday anymore,” he said.  “Life’s too short to work that hard.”

Almost anything a small town resident might need can be found within the 38 by 48 foot frame building.  Dry goods, clothing, groceries, fresh meat, school equipment, medical supplies, hardware, and cold soda pop are all stocked.  “Tastes of the buying public have changed since I took over the store in 1892,” the white-haired Mr. Gelston said.  “I used to buy flour and feed by the carload lot –three a year.  Now I seldom sell a 50 pound sack of flour.  It goes out mostly in five and 10 pound cartons.”
A six-by-eight-foot booth in south-east corner of the store houses Elk City’s postoffice.  Mr. Gelston was postmaster from 1898 until he was retired in 1940.  Prior to that he was assistant postmaster for six years.”

“Frank Gelston was born at Clarks, Neb., October 5, 1863, and moved with his parents, Mr. and Mrs. George W. Gelston to Elk City in the spring of ’66.’  Tall, lean, and straight, he declared that long lives run in the family.  When he first moved to the community, the town was called Elkhorn City but later, because mail was confused with Union Pacific’s Elkhorn Station, 22 miles west of Omaha, trainmen asked the Post Office Department to change Elkhorn City’s name.”

“In 1866, Elk City was a stagecoach station on the military trail between Omaha and Fremont and points west.  The town had a large hotel and the present store.  Wagon trains moved west would stop overnight, Mr. Gelston said, and many times, troops en route west to quell an Indian uprising would camp near the town.   Each fall Indian tribes traveled through.”….”During this period of the town’s history it was not uncommon to see 12 or 14 four-horse teams hobbled by the livery stable, he recalled.”

“His mother worked at the hotel and his father drove a stage between Omaha and Fremont.  Since Elk City was on the stage line, they became acquainted and were married there.  They moved to Clarks to take over a stage station, where Frank was born.  He is the oldest of eight children, six of whom are still living.  Although he doesn’t recall the incident, he remembers his mother’s telling of a Sioux Indian uprising north of Clarks while the family lived there.

In March, 1892, he married Mary Gains, who had moved to Elk City from Illinois.”  “When he first took over the store, he would travel to Omaha in a wagon to pick up supplies.  If night overtook him, he would stay in Benson overnight.  It was during one of these trips that he met Joe McGuire, Benson postmaster.  Still in use at the Elk City Post Office is the mail case which he bought from Mr. McGuire 45 years ago.  The case has 16 boxes with combination locks and 28 racks where patrons must ask a clerk for their mail.  The post office serves 25 customers, and since no railroad runs through the town, mail is brought in by rural carriers from Valley and Bennington.

Leaning against the counter, recalling the past 86 years, Mr. Gelston listened to the drone of an automobile approaching on State Highway No. 8.  “When the U.P. and C. & N. W. railroads missed Elk City,” he said, “the town’s chance to grow was killed.”
Posted by Bennington Historical Society at 7:19 AM