I often check Ebay for old photographs and articles about our local history.  This week I found a Bennington medallion advertised for sale and I bought it.  Here is a little history about it and this year’s Bennington Daze celebration. 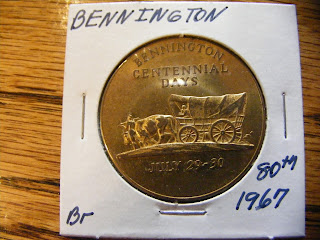 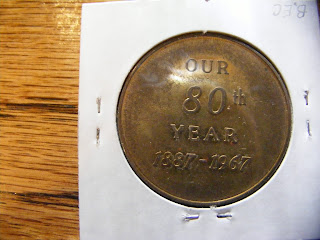 Fifty years ago (1967), Bennington celebrated Nebraska’s Centennial and its 80th Birthday (1887-1967).   We celebrated it in style with a Centennial Day’s parade and party during the weekend of July 29.

The Bennington Woman’s Club put together a pamphlet entitled “History of Bennington Nebraska 1887-1967” that recognized the “Nebraska Centennial year and marks Bennington’s eightieth year of establishment”.   Their work summarized the high points of interest in our Community’s history along with photographs.  It is an excellent source of information. 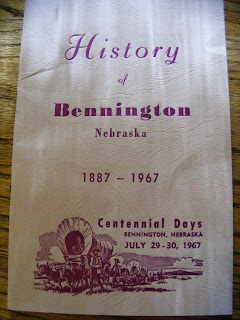 Some (?) group also had medallions made to celebrate the event.  One side showed a covered wagon with Centennial Days inscribed and the other side proclaimed “Our 80th Year 1887-1967”.
Bennington, for some unknown reason didn’t specifically celebrate the centennial of its founding in 1987 and instead celebrated the centennial of its incorporation five years later in 1992.  Incorporation happened when the town’s population reached 200.   This may have been the result of a major effort to document our town's history in a book entitled: "Bennington Nebraska 1992-1992" edited by Gary Sathers and Edna Mohr.  They did an excellent job of pulling together old photographs and document family and Community history. 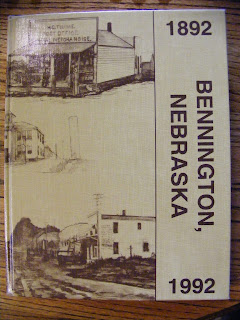 There certainly isn’t anything wrong with celebrating incorporation but it's highly irregular to celebrate "Incorporation" rather than a town’s ‘founder’s day’.   We know of no other community that does that.

In 2012, an effort was made to recognize Bennington’s 125th Birthday with a Proclamation.   The City Council refused to take up the topic, suggesting it was to confusing.   Mayor Johnson signed the Proclamation without the Council’s support but again, that milestone wasn't recognized during Bennington Daze.

That same year, Washington celebrated their 125th Birthday.  Their town was dedicated one month earlier than Bennington but didn't incorporate until 1915.  That was 23 years later than Bennington.  Their community grew at a much slower rate.

This year I turn 67.  Next year instead of celebrating my birthday, I'm going to  celebrate when I graduated from High School instead.  That will make me 50!  That works for me.

Happy Bennington Daze!   Come join us the weekend of June 9th.
Posted by Bennington Historical Society at 7:21 AM